Spansion Inc. was an American-based company that designed, developed, and manufactured flash memory, microcontrollers, mixed-signal and analog products, as well as system-on-chip (SoC) solutions. The company had more than 3,700 employees in 2014 and is headquartered in Sunnyvale, California. Spansion is a former joint-venture between AMD and Fujitsu. In August 2013, Spansion closed the acquisition of the Microcontroller and Analog Business of Fujitsu Semiconductor Limited.

Spansion had more than 10,000 customers worldwide. Its products were used in the following markets: automotive electronics, home appliance, peripheral computing equipment, consumer equipment, industrial and networking.Spansion was founded in 1993 as a joint venture between AMD and Japan's Fujitsu Ltd. Spansion was formerly known as FASL LLC. Once AMD took control of the company in 2003, it was renamed Spansion LLC in June 2004[5] and officially spun off as an independent maker of flash memory chips in December 2005.

After joining the company in 2009, CEO, John Kispert, brought Spansion out of bankruptcy with over $1 billion in sales and 10,000 customers worldwide. In 2013, Spansion purchased Fujitsu’s microcontroller and analog business for $175 million, expanding Spansion’s work force by more than 1,000 worldwide. 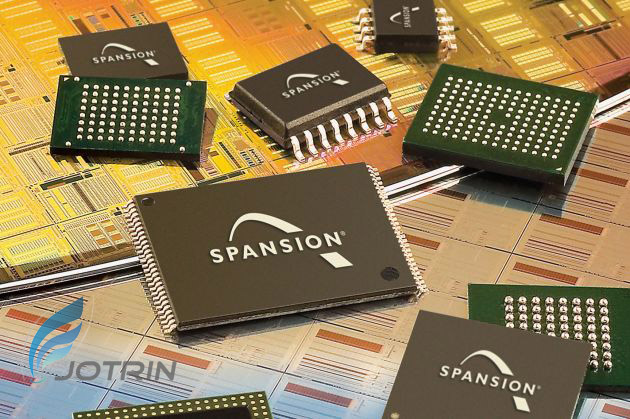 In October 2007, Spansion announced that it was acquiring Israel-based Saifun Semiconductors Ltd., non-volatile memory provider. The companies signed an agreement that consolidated all MirrorBit and NROM IP, design and manufacturing expertise within Spansion. As a result, Spansion expanded IP portfolio and enabled its immediate entry into the technology licensing business. The acquisition closed on March 18, 2008.

In April 2013, Spansion announced that it would acquire the Microcontroller and Analog Business of Fujitsu Semiconductor for approximately $110 million and approximately $65 million for inventory.[10] Spansion closed the acquisition deal in August 2013.

In December 2014, Cypress Semiconductor merged with Spansion in an all-stock deal worth $1.59 billion. Shareholders of each side will own about 50 percent of the new company, which will keep the name of Cypress Semiconductor Corp. The companies valued the deal at $4 billion. They expected it to close in the first half of 2015 and to cut annual costs by $135 million within three years. Cypress President and CEO TJ Rodgers was the CEO of the combined company, which was expected to have $2 billion in annual revenue. Spansion Chairman Ray Bingham was the non-executive chairman.

Spansion had its headquarters in Sunnyvale, California. The company's main wafer fabrication facility, known as Fab 25, was in Austin, Texas. The company also operated a final-manufacturing facility, in Bangkok, Thailand. In Penang, Malaysia, the company had a design center to focus on providing design, layout, CAD and verification services and to support to cross-site design centers.