Three generations of Zynq UltraScale+ RFSoCs integrate up to 16 channels of RF-ADCs and RF-DACs, all with excellent noise spectral density. The RF data converters also include power efficient digital down converters (DDCs) and digital up converters (DUCs) that include programmable interpolation and decimation, NCO, and complex mixer. The DDCs and DUCs can also support dual-band operation. See Table 1 for key features and sample rates. 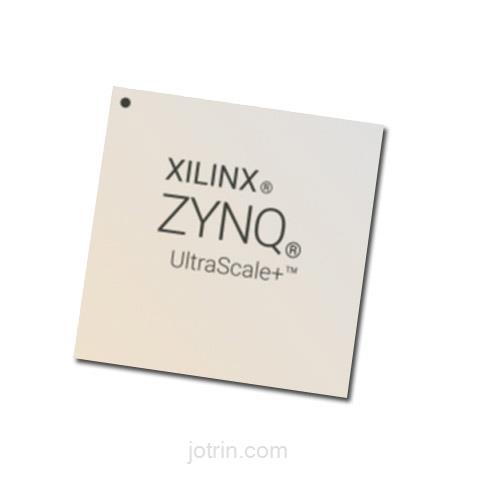 Processing System Overview
Zynq UltraScale+ RFSoCs feature a quad-core Arm Cortex-A53 (APU) with a dual-core Arm Cortex-R5 (RPU) processing system (PS). To support the processors' functionality, a number of peripherals with dedicated functions are included in the PS. For interfacing to external memories for data or configuration storage, the PS includes a multi-protocol dynamic memory controller, a DMA controller, a NAND controller, an SD/eMMC controller and a Quad SPI controller. In addition to interfacing to external memories, the APU also includes a Level-1 (L1) and Level-2 (L2) cache hierarchy; the RPU includes an L1 cache and Tightly Coupled memory subsystem. Each has access to a 256KB on-chip memory. For high-speed interfacing, the PS includes 4 channels of transmit (TX) and receive (RX) pairs of transceivers, called PS-GTR transceivers, supporting data rates of up to 6.0Gb/s. These transceivers can interface to the high-speed peripheral blocks that support PCIe® at 5.0GT/s (Gen2) as a root complex or Endpoint in x1, x2, or x4 configurations; Serial-ATA (SATA) at 1.5Gb/s, 3.0Gb/s, or 6.0Gb/s data rates; and up to two lanes of DisplayPort at 1.62Gb/s, 2.7Gb/s, or 5.4Gb/s data rates. The PS-GTR transceivers can also interface to components over USB 3.0 and Serial Gigabit Media Independent Interface (SGMII). For general connectivity, the PS includes: a pair of USB 2.0 controllers, which can be configured as host, device, or On-The-Go (OTG); an I2C controller; a UART; and a CAN2.0B controller that conforms to ISO11898-1. There are also four triple speed Ethernet MACs and 128 bits of GPIO, of which 78 bits are available through the MIO and 96 through the EMIO. High-bandwidth connectivity based on the Arm AMBA® AXI4 protocol connects the processing units with the peripherals and provides interface between the PS and the programmable logic (PL).

I/O, Transceiver, PCIe, 100G Ethernet, and 150G Interlaken
Data is transported on and off chip through a combination of the high-performance parallel SelectIO™ interface and high-speed serial transceiver connectivity. I/O blocks provide support for cutting-edge memory interface and network protocols through flexible I/O standard and voltage support. The serial transceivers in the UltraScale architecture-based devices transfer data up to 28.21Gb/s, enabling 25G+ backplane designs with dramatically lower power per bit than previous generation transceivers. All transceivers, except the PS-GTR, support the required data rates for 8.0GT/s (Gen3) and 16.0GT/s (Gen4) for PCIe. The integrated blocks for PCIe can be configured as either Endpoint or Root Port, supporting a variety of link widths and speeds depending on the targeted device speed grade and package. Integrated blocks for 150Gb/s Interlaken and 100Gb/s Ethernet (100G MAC/PCS) extend the capabilities of UltraScale™ devices, enabling simple, reliable support for Nx100G switch and bridge applications.

Configuration, Encryption, and System Monitoring
Zynq UltraScale+ RFSoCs are booted via the configuration security unit (CSU), which supports secure boot via the 256-bit AES-GCM and SHA/384 blocks. The cryptographic engines in the CSU can be used in the RFSoC after boot for user encryption. The System Monitor enables the monitoring of the physical environment via on-chip temperature and supply sensors and can also monitor up to 17 external analog inputs. 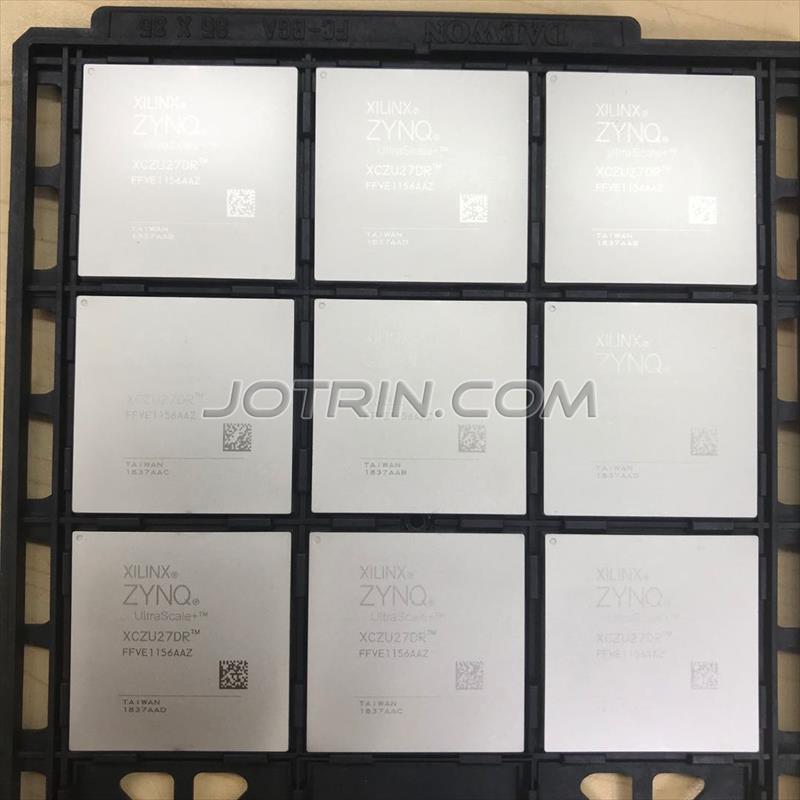 Q: How does Jotrin guarantee that XCZU27DR-2FFVE1156I is the original manufacturer or agent of XILINX?
We have a professional business development department to strictly test and verify the qualifications of XILINX original manufacturers and agents. All XILINX suppliers must pass the qualification review before they can publish their XCZU27DR-2FFVE1156I devices; we pay more attention to the channels and quality of XCZU27DR-2FFVE1156I products than any other customer. We strictly implement supplier audits, so you can purchase with confidence.
Q: How to find the detailed information of XCZU27DR-2FFVE1156I chips? Including XILINX original factory information, Zynq UltraScale+ RFSoC application, XCZU27DR-2FFVE1156I pictures?
You can use Jotrin's intelligent search engine, or filter by Zynq UltraScale+ RFSoC category, or find it through Xilinx, Inc Information page.
Q: Are the XILINX's XCZU27DR-2FFVE1156I price and stock displayed on the platform accurate?
The XILINX's inventory fluctuates greatly and cannot be updated in time, it will be updated periodically within 24 hours. After submitting an order for XCZU27DR-2FFVE1156I, it is recommended to confirm the order with Jotrin salesperson or online customer service before payment.
Q: Can I place an order offline?
Yes. We accept offline orders.
We can provide order placement service. You only need to log in, click "My Orders" to enter the transaction management, and you will see the "Order Details" interface. After checking it, select all and click "Place Order". In addition, you can enjoy coupons or other selected gifts when placing orders online.
Q: What forms of payment can I use in Jotrin?
TT Bank, Paypal, Credit Card, Western Union, and Escrow is all acceptable.
Q: How is the shipping arranged and track my package?
Customers can choose industry-leading freight companies, including DHL, FedEx, UPS, TNT, and Registered Mail.
Once your order has been processed for shipment, our sales will send you an e-mail advising you of the shipping status and tracking number.
Note: It may take up to 24 hours before carriers will display tracking information. In normal conditions, Express delivery needs 3-5 days, Registered Mail needs 25-60 days.
Q: What is the process for returns or replacement of XCZU27DR-2FFVE1156I?
All goods will implement Pre-Shipment Inspection (PSI), selected at random from all batches of your order to do a systematic inspection before arranging the shipment. If there is something wrong with the XCZU27DR2FFVE1156I we delivered, we will accept the replacement or return of the XCZU27DR-2FFVE1156I only when all of the below conditions are fulfilled:
(1)Such as a deficiency in quantity, delivery of wrong items, and apparent external defects (breakage and rust, etc.), and we acknowledge such problems.
(2)We are informed of the defect described above within 90 days after the delivery of XCZU27DR-2FFVE1156I.
(3)The XCZU27DR-2FFVE1156I is unused and only in the original unpacked packaging.
Two processes to return the products:
(1)Inform us within 90 days
(2)Obtain Requesting Return Authorizations
More details about return electronic components please see our Return & Change Policy.
Q: How to contact us and get support, such as XCZU27DR-2FFVE1156I datasheet pdf, XCZU27DR pin diagram?
Need any After-Sales service, please feel free contact us: sales@jotrin.com