To achieve more automation within a factory, industrial robot applications at scale are essential. From automotive and aircraft manufacturing to the pharmaceutical industry to logistics and metalworking, the number of applications is growing with a new generation of best-in-class industrial robots that can handle more complex tasks.

Industrial robots are now in high demand for versatile, flexible, and intelligent end tools, and these designs require robust, high-speed, and reliable connections. In contrast, the connection system collects and transmits many data points from the robot and its manufacturing environment at the fastest possible speed so that the system can make timely control. On the other hand, there is a considerable headache in selecting connections to protect the power and data flow to meet the challenges. 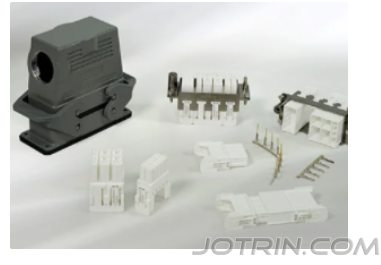 M12 connectors, commonly used in robot sensing systems, also take the miniaturized and modular development route. Power, signal, and data transmission, male and female pins are combined in a single module, greatly reducing the number of interfaces required for each cell. The connectors have become smaller and lighter, allowing more modules to be packed into one complete connector.

Robot manufacturers can be flexible in the connector configuration and even expand and customize the connector according to their individual needs. This trend enables the safe and error-free transmission of power, data, and signals and provides additional added value to the user.

The connection of the entire system of robots involves power, signals, and communication on the one hand and the associated interconnections, including mixed types of interconnections, on the other. The development of miniaturization solves part of the reliability problems of interconnected systems, mainly in terms of physical characteristics. On the other side, interconnected data is particularly sensitive to EMI, as is the case with 10Gb/s industrial Ethernet, and the system's electrical performance must be maintained by shielding the connectors.

Generally speaking, the weakest link is at the end of the Ethernet cable, the connector, which is the RJ45 connector, and the industrial Mini I/O connector, the two industrial Ethernet connectors. Industrial robots require many of these connections, not only for simpler and smaller cables but also to communicate at higher bandwidths while reducing the weight of the entire connection assembly to make the robot easier to move.

RJ45 connections in robotics applications are now equipped with 360° EMC protection, which enhances shielding to the highest level. Some additional optimized RJ45s use three-wire chokes to reduce interference between the PoE and the signal to almost nothing, provide better signal integrity, and prevent saturation, reducing transmission errors on the connection.

Mini I/O connectors do the same, starting with material selection to improve physical reliability, and the dual contact point contact design reduces unnecessary indirect communication losses. EMI and signal integrity are optimized through signal path design, and 360° shielding ensures high-speed transmission of next-generation CAT 6A, ensuring that the entire robot electrical system is immune to interference so that the system can make timely control of the robot with a large amount of data.

The overall connection system for industrial robots now looks at miniaturization, reliability, and flexibility. The trend toward modular design has resulted in various flexible combinations of connection components that save more space while achieving higher transmission density. Applying more optimized signal integrity technologies and fully shielded designs ensures the complete transmission of massive amounts of data. The development trend of connection systems is in line with upgrading industrial robots.

Vorherige: How do inductors, resistors, and wires protect the circuit?

Nächste: How to choose TVS devices