1. The working principle of capacitors in power supply design

In power supply design applications, capacitors are mainly used for filter and decoupling/bypass. Filtering is the operation of filtering out a specific band of frequencies in a signal, an important measure to suppress and prevent interference. The probability theory and method of estimating another random process related to it are based on the results of observing a random process. The term filtering originated in communications theory as a technique to extract a useful signal from a received signal that contains interference. The "received signal" is equivalent to the observed random process, and the "useful signal" is equivalent to the estimated random process.

Filtering mainly refers to external filtering noise, while decoupling reduces the local circuit noise interference to the outside. Many people tend to confuse the two. Let's look at a circuit structure. 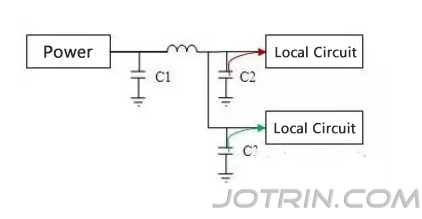 After adding C2, when the local circuit needs a momentary high current, the capacitor C2 can temporarily provide current for A. Even if the common circuit inductor exists, the voltage at A will not drop too much. The impact on B will also be much reduced. So the role of decoupling is played by the current bypass.

General filtering mainly uses large-capacity capacitors, the speed requirements are not very fast, but the capacitance value requirements are large. If the local circuit A in the diagram refers to a chip, and the capacitor is as close as possible to the power supply pin of the chip. Suppose the "local circuit A" is a function module. In that case, you can use ceramic chip capacitors or tantalum or aluminum electrolytic capacitors if the capacity is insufficient (provided each chip in the function module has decoupling capacitors - ceramic chip capacitors).

Many high-speed chip design manuals with more pins will give the power supply design requirements for decoupling capacitors. For example, a 500+ pin BGA package requires at least 30 porcelain chip capacitors for a 3.3V power supply and several large capacitors, with a total capacity of 200uF or more.

2. The correct choice of capacitors in various power supplies

The structure of the capacitor is stated. The simplest capacitor comprises pole plates at both ends and an insulating dielectric (including air) in the middle. When energized, the pole plates are charged, creating a voltage (potential difference), but the entire capacitor is non-conductive because of the insulating substance in the middle. However, such a situation is under the condition that the capacitor's critical voltage (breakdown voltage) is not exceeded. As we know, any material is relatively insulated. When the voltage at both ends of the material increases to a certain degree, the material is conductive, and we call this voltage the breakdown voltage.

Capacitors are no exception. Capacitors are not insulators after the breakdown. However, at the secondary school level, such a voltage is not seen in the circuit, so they work below the breakdown voltage and can be treated as insulators. However, in AC circuits, the current's direction changes as a time function. And the process of charging and discharging the capacitor is time-dependent, and at this time, a changing electric field is formed between the pole plates, and this electric field is also a function of time.

How to choose filtering capacitors for switching power supplies

Many electronic designers are aware of the role of filter capacitors in the power supply, but the filter capacitors used at the output of the switching power supply and the filter capacitors selected in the frequency circuit are not the same; the pulsating voltage frequency is only 100 Hz, the charge and discharge time is milliseconds order of magnitude, to obtain a smaller pulsation coefficient, the required capacity of hundreds of thousands of microfarads, and thus the general low frequency with ordinary aluminum electrolytic capacitors, manufacturing. The goal is to increase the capacitance. Capacitance, loss angle tangent, and leakage current of capacitors are the main parameters to identify their merits.

In the switching power supply as an output filter electrolytic capacitor, the frequency of the sawtooth voltage is up to tens of kHz or even tens of MHz. Its requirements are different from low-frequency applications. The capacity is not the main indicator. The measure of its good or bad is its impedance a frequency characteristics. It is required to have a low impedance in the switching power supply operating band; at the same time, for the internal power supply, due to the semiconductor devices At the same time, the power supply internal, due to the semiconductor devices began to work up to hundreds of kHz of spike noise, but also can have a good filtering effect, the general low frequency with ordinary electrolytic capacitors in about 10 kHz, its impedance will begin to show inductive, can not meet the requirements of switching power supply.

The high-frequency aluminum electrolytic capacitor for switching power supply has four terminals, the two ends of the positive aluminum piece are led out as the positive terminal of the capacitor, and the two ends of the negative aluminum piece are also led out as the negative terminal. The current from the regulated power supply flows from one positive end of the four-terminal capacitor, passes through the inside of the capacitor, and then flows from the other positive end to the load; the current returning from the load also flows from one negative end of the capacitor and then flows from the other negative end to the negative end of the power supply. Because the four-terminal capacitor has good high-frequency characteristics, it provides an extremely favorable means to reduce the pulsating component of the output voltage and suppress the switching spike noise.

Switching voltage regulator with multifunctional integrated protection: In addition to the most basic voltage stabilization function, the regulator should also have overvoltage protection (more than +10% of the output voltage), Undervoltage protection (less than -10% of the output voltage), phase failure protection, short-circuit overload protection of the most basic protection functions. Sharp pulse suppression (optional): the grid sometimes has a high amplitude. The pulse width is a very narrow, sharp pulse, and it will break through the lower voltage electronic components. The anti-surge components of the regulated power supply can play a good role in suppressing such sharp pulses.

High-frequency aluminum electrolytic capacitors are also available in the multi-cell form, which divides the aluminum foil into shorter sections and connects them in parallel with multiple lead sheets to reduce the resistive component in the capacitive resistance while using low resistivity materials and screws as lead terminals to enhance the capacitor's ability to withstand high currents.

The stacked capacitor is also called a non-inductance capacitor; generally, the core of an electrolytic capacitor is rolled into a cylindrical shape, and the equivalent series inductance is larger; the structure of a stacked capacitor is similar to the book, and the magnetic flux generated by the flowing current is offset by the opposite direction, thus reducing the value of inductance and having more excellent high-frequency characteristics, this capacitor is generally made into a square shape, which is easy to fix and also can appropriately reduce the occupied volume. 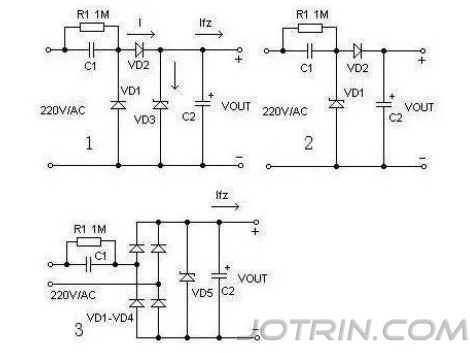 As the rated power of gate-controlled semiconductor devices becomes larger and larger, the switching speed becomes faster and faster, and the rated voltage becomes higher and higher. It is not enough for the capacitor of the buffer circuit to require only sufficient withstand voltage, capacity, and excellent high-frequency characteristics.

In high-power power electronic circuits, as the switching speed of IGBT is less than 1μs, it is normal to require the voltage change rate DV/dt "V/μs" on the capacitor of the absorption circuit, and some require V/μs or even V/μs.

It can be seen that although the same non-inductance capacitor, metallization, and metal foil capacitor will have different performances when applied in an absorption circuit, the similar shape but different specifications are not interchangeable here. The size of the capacitor will affect the DV/dt and peak current withstand of the capacitor, generally speaking, the larger the length, the smaller the DV/dt and peak current.

In some special applications, energy storage capacitors are required to be discharged repeatedly and rapidly, and the discharge circuit resistance is meager. The parasitic inductance is very small, in which case the absorber capacitors can only be used in parallel to ensure long-term reliability.

Resonant converter, such as resonant switching power supply and resonant capacitor in the resonant circuit of thyristor IF power supply, often flows a large current when working. Another example is the electronic ballast resonant capacitor specifications are not properly selected. There will be capacitors on the voltage that did not reach the breakdown voltage due to the flow of a large resonant current and damage to the phenomenon.

The circuit oscillation phenomenon may gradually disappear or may continue to be maintained unchanged. When the oscillation is continuously maintained, we call it equal-amplitude oscillation, also known as resonance.

In summary, in modern power supply technology, different applications require different performance capacitors that can not be mixed, abused, or misused in order to eliminate as much as possible should not appear damaged and to ensure product performance.

The conventional method of converting AC mains power to low-voltage DC is to use transformers to step down and then rectify and filter. When limited by the size and cost of factors, the simplest and most practical method is to use a capacitor step-down power supply.

The basic circuit of the capacitor step-down power supply is shown in Figure 1. C1 is the step-down capacitor, D2 is the half-wave rectifier diode, D1 provides a discharge circuit to C1 during the negative half of the mains, D3 is the voltage regulator diode, and R1 is the charge-discharge resistor of C1 after the power is turned off. The circuit shown in Figure 2 is often used in practical applications. When a larger current is required to be supplied to the load, the bridge rectifier circuit shown in Figure 3 can be used. The unregulated DC voltage after rectification is generally higher than 30 volts and fluctuates greatly with changes in load current, which is due to the large internal resistance of this type of power supply and is therefore not suitable for high current supply applications.

(1) When designing the circuit, the exact value of the load current should be measured first, and then the capacity of the bulk capacitor should be selected by referring to the example. The excess current will flow through the regulator, and if the maximum allowable current Imax of the regulator is less than Ic-Io, it is easy to cause the regulator to burn up.

(2) To ensure the reliable operation of C1, the withstand voltage should be more than twice the supply voltage.

(3) The selection of the drain resistor R1 must ensure that the charge on C1 is discharged within the required time.

Usually, the relationship between the capacity C of buck capacitor C1 and the load current Io can be approximated as C = 14.5 I, where the capacity unit of C is μF and the unit of Io is A.

Nächste: What is the ripple and noise of the power supply?