Startseite > 5G > WiFi 7 has Arrived with a Lightning-Fast Connection

WiFi 7 has Arrived with a Lightning-Fast Connection

The summer of 2022 is coming, and the person to thank every summer is naturally the mother of WiFi, Hedy Lamarr, who is both beautiful and wise. Previously, when 5G first became commercially available, some people thought that when 5G came, WiFi might be the time to quit. But it turns out that even in 2022, WiFi will still be an integral part of life. As an important technology that changes our lives, wireless communication technology plays an important role in offloading traffic with cellular networks. With the development of WLAN technology, families and businesses are increasingly dependent on Wi-Fi as the main means of accessing the network. Mobile communication technology is being updated and iterated, WiFi technology is also evolving, and unknowingly, WiFi 7 has quietly arrived.

In recent years, the emergence of new applications such as 4K and 8K video, VR/AR, gaming, telecommuting, online video conferencing, and cloud computing have continued to increase the requirements for network throughput rates and latency, and the industry is already in the early stages of next-generation Wi-Fi development. While there is more than one next-generation Wi-Fi standard and "WiFi 7" is just a commercial symbol used by the WiFi Alliance to promote it to the general consumer, it is now generally used to refer to the new WiFi devices based on the 802.11be draft that has not yet been finally approved for launch in May 2021. The new specification for WiFi devices is based on the draft 802.11be, which has not yet been finally approved. According to the report, the entire WiFi 7 protocol standard will be released under two Releases. Release 1 is expected to be released at the end of 2022; Release 2 is expected to start in early 2022 and complete the standard release at the end of 2024. If the 2019 release of Wi-Fi 6 only provides higher speeds than Wi-Fi 5, then Wi-Fi 7 is complete to provide lightning-fast connections. From the data, Wi-Fi 7 is expected to be able to support up to 30Gbps of throughput, the maximum network speed of up to 46.4Gbps, which is 4.8 times the maximum network speed of WiFi 6 9.6Gbps. 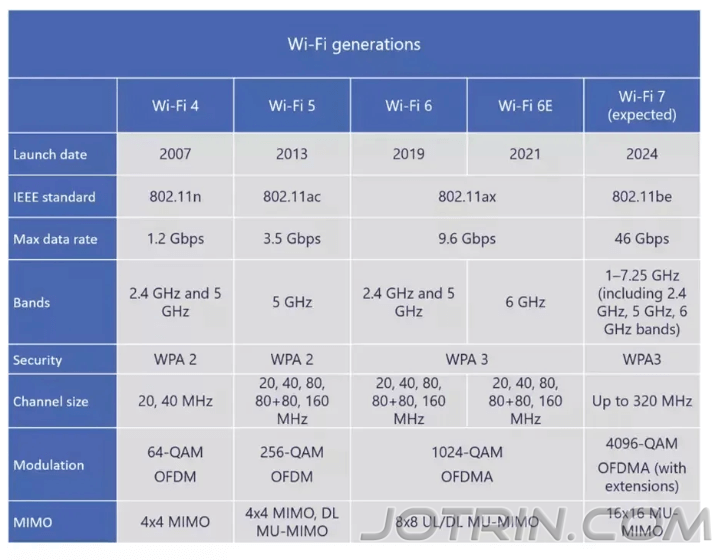 From the chart above, compared to the previous WiFi 4, WiFi 5, WiFi 6, and WiFi 6E, WiFi 7 introduces new technologies or improves existing technologies such as frequency band, maximum bandwidth, modulation method, and MIMO.

Wi-Fi 7 will take full advantage of the new 6 GHz band (actually 5.925-7.125 GHz). 6 GHz WiFi is different from 6G. The band is currently used in Wi-Fi networks and was first supported in Wi-Fi 6E, representing the 6th generation standard for broadband cellular network technology. Compared to bands such as 2.4 GHz and 5 GHz, 6 GHz operates at a higher frequency band and offers greater bandwidth, translating into faster speeds and more capacity for high-bandwidth and low-latency activities such as streaming media and gaming. Currently, the 6GHz band is only occupied by Wi-Fi applications, and its use causes much less interference than the 2.4GHz or 5GHz bands. Wi-Fi 7 adds new bandwidth modes for faster connections from the original 160 MHz in Wi-Fi 6, including continuous 240 MHz, non-continuous 160+80 MHz, continuous 320 MHz, and non-continuous 160+160 MHz.

To achieve efficient utilization of all available spectrum resources, Wi-Fi 7 defines technologies related to multi-link aggregation, mainly including MAC architecture for enhanced multi-link aggregation, multi-link channel access and multi-link transmission, and other related technologies that can combine multiple channels at different frequencies to provide better network performance. Wi-Fi 7 attempts to enhance these links by increasing throughput, which Throughput is the measured data between devices in the local network (LAN).

In Wi-Fi 7, the number of spatial streams is increased from 8 in Wi-Fi 6 to 16, which theoretically can more than double the physical transmission rate. Supporting more data streams will also lead to a more powerful feature - distributed MIMO, meaning that 16 data streams can be provided not by a single access point but by multiple access points simultaneously, meaning that multiple APs need to work in concert with each other.

Technologies such as MLO and wider channels mentioned above will further reduce network latency and make it more predictable.

Even though the global WiFi 7 technical specification has not yet been finalize alized, the industry is generally optimistic about the subsequent market development, driven by new concepts and applications such as metaverse, autonomous driving, and AIOT. In the face of the objective blue ocean market in the future, WiFi chip head manufacturers naturally want to seize the first opportunity. Since 2022, Broadcom, Qualcomm, and MediaTek, three major manufacturers, have released one after another wifi 7 main control chip and show its related technology.

Broadcom is the first supplier to announce a complete Wi-Fi 7 product portfolio. In April, Broadcom launched its first WiFi 7 SoC, called BCM4916, with a quad-core Armv8 processor with 64KB of L1 cache and 1MB of L2 cache, capable of delivering 24 DMIPS of performance. The SoC supports DDR3 and DDR4 memory, 2.5 Gbps and 10 Gbps network interfaces, and offers a USB 3.2 interface.

At the end of February, Qualcomm launched FastConnect 7800, the world's first WiFi 7 chip, which fully supports all the Wi-Fi 7, with support for the 2.4GHz, 5GHz, and 6GHz bands, high-frequency multi-connectivity concurrent technology, 4-way dual-band and features extended to high performance. The FastConnect 7800 supports all the features of Wi-Fi 7, including support for 2.4GHz, 5GHz, and 6GHz bands, concurrent high-frequency multi-connectivity, 4-way dual-band and feature expansion to high-band, 4K QAM modulation, peak transmission speeds of up to 5.8Gbps, an increase of up to 60 percent over its predecessor, and support for latency below 2ms. Qualcomm claims to offer 50 percent lower power consumption, two times faster-pairing speeds, and two times greater signal acceptance range than its predecessor. Currently, the FastConnect 7800 is now sampling. It is expected to be commercially available in the second half of this year, with the first customers including Acer, Asus, Honor, Meta (Facebook), OPPO, Tencent, Vivo, Xiaomi, and others.

Write at the end

In 2019, with the birth of the Wi-Fi 6 standard and market demand, the chip manufacturers brought a big opportunity for development, "Wi-Fi 6" once became the necessary label for each cell phone manufacturer to release new machines in 2020. Then, the upcoming Wi-Fi 7 is bound to be a new opportunity. What manufacturers need to do now is to precipitate the technology to hold the opportunity tightly in their hands. After all, the opportunity will only be left to those prepared. 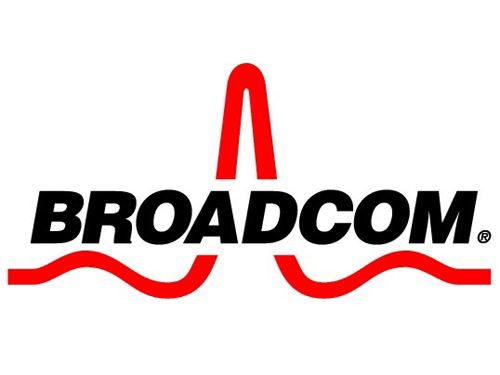